Well I have entered the car for the mid March 2017 Phillip Island Classic race meeting and whilst a year behind the original plan things are looking hopeful.

There are three more blog posts after this one. The next post will be photos of the car fully assembled (these are necessary for the Historic Technical Passport plus the CAMS Log Book and Certificate of Description applications), then a post on the results of the Dyno runs (booked for the 24th and 25th December) and then the final post will be after the Phillip Island meeting.

On the 26th Dec I will be opening a really nice bottle of red to celebrate (if all goes well at the dyno runs with the rebuilt motor and gearbox) or alternatively I will be opening two bottles of less expensive red, in quick succession, to drown my sorrows.

I have purchased a replacement but identical spark box from Hall and Hall (who had it made especially) and it is made to utilise a magnetic trigger as is the case with the original, rather than a more modern Hall Effect trigger. The only difference is that the new one incorporates the rev limiter in the spark box rather than there being a separate rev limiter as on the original, and it also has a rectifier built in, so there is a small amount of rewiring to be done.

New spark box on the left, original on the right in photo below. 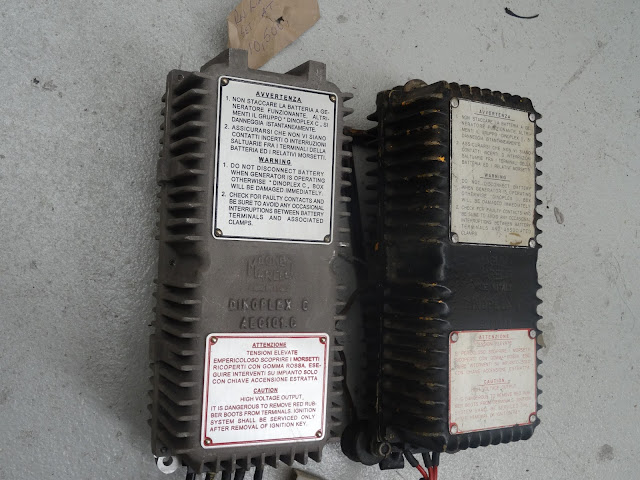 Original external rev limiter in the photo below which I will keep on the car for the sake of authenticity. 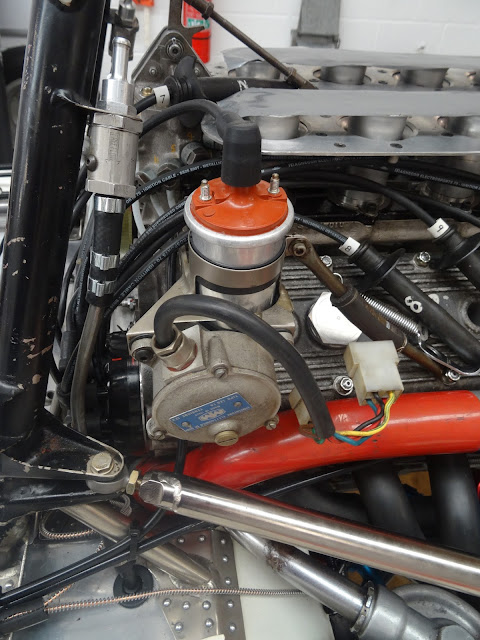 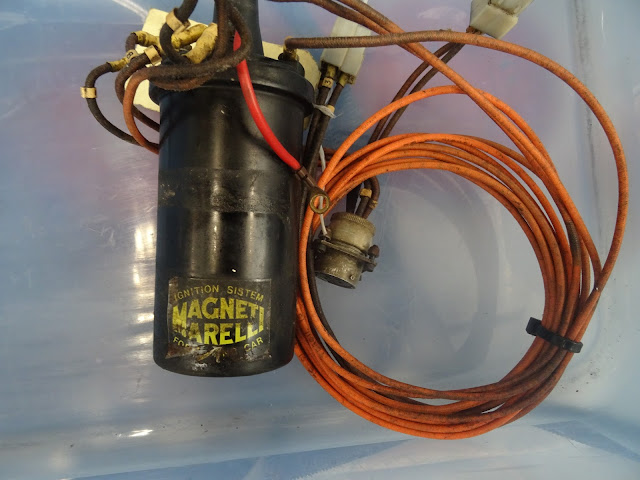 Wiring to all switches and all terminal points are soldered connectors with yellow shrink wrap and each wire has a letter code. 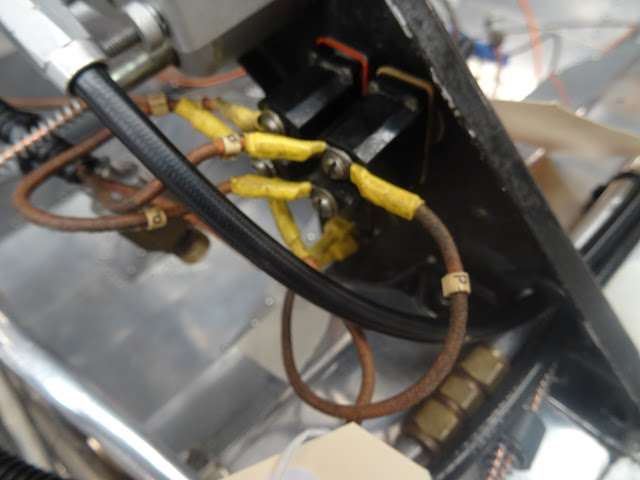 Connections between various electrical items are military / aircraft industry 3 or 4 or 5 pin connectors. 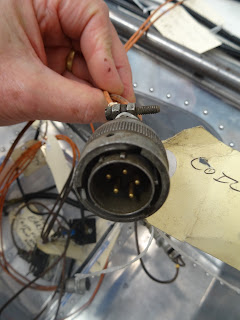 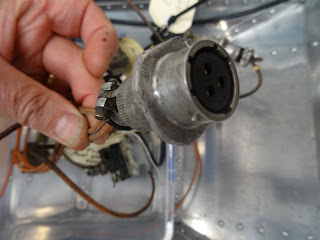 Electrical Wire
The original wire is still in fantastic condition, probably as the car has had such little use and was stored in the Donington Museum from 1981 through to when I purchased it about 18 months ago.
It is aircraft wire, mostly TERSIL 16-BL and a heavier grade for the power in lines. This wire is no longer available. I intend to reuse the harness and do so in a way that would allow reconnection of the original components in the future if required. As can be seen in the photo below it has 4 layers of covering over the fine gauge tinned copper wiring. The wiring is also in good condition as it was largely bundled and encased in black flexible ribbed tubing. 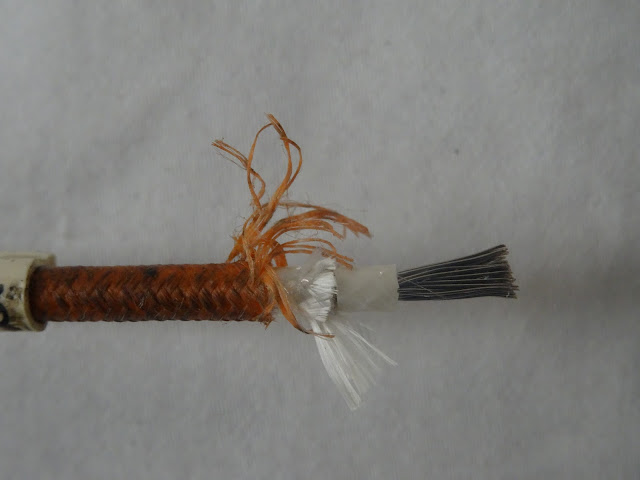 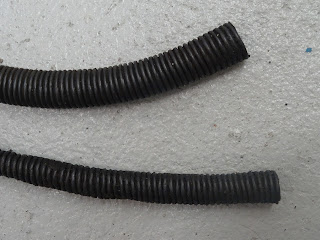 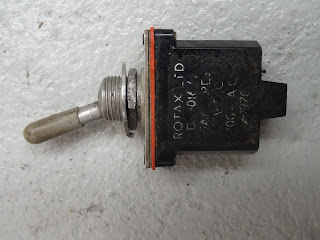 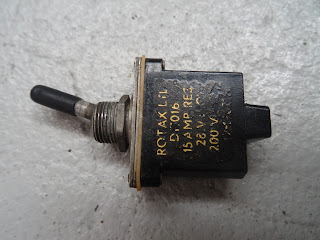 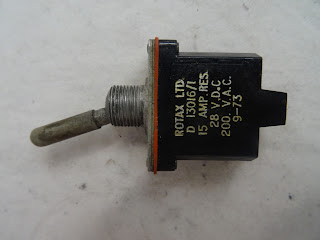 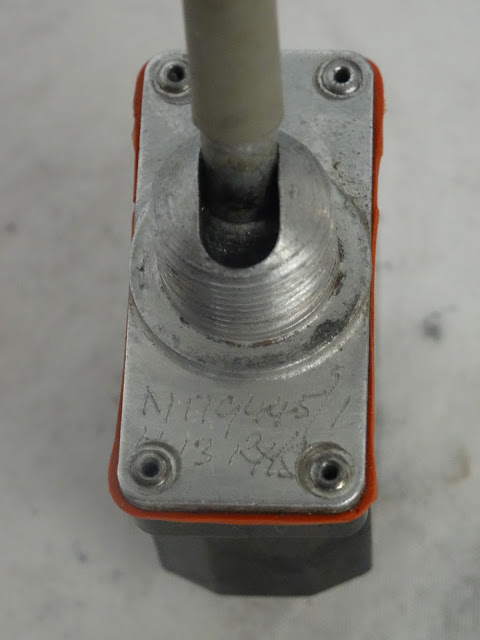 Exhaust Nuts - as sad tale.
The photo below is of the original brass exhaust nuts on the left (with a 'locking' arrangement incorporated in the design), modern high temp brass exhaust nuts (purchased from the UK) in the middle and modern high temp k nuts on the right.
I originally installed the exhaust pipes using the original brass nuts however there were more which were rounded than I first thought. But I used them as I wanted to install the exhaust pipes, which you need to do before mounting the suspension. After pondering overnight I decided to buy some new brass nuts which I located from a supplier in the UK who promised fast delivery. I assumed they would be a tight fit or slightly undersize so they would not vibrate loose. Then I kept going and installed an array of other lines, pipes, bracing rods, gear change mechanism etc etc.
The new brass nuts arrived so I removed all the original nuts (all 48) from what had then become very tight spaces (photo below) and started installing the new brass nuts. These I discovered were not tight on the thread at all.
After pondering again all night I decided I would be forever worried they would vibrate loose and given how difficult most nuts were to access they were not the thing one would want to tighten at the track with a hot engine. So I then contacted Bryan Miller at Eastern Raceparts who sold me the modern high temp aluminum exhaust K nuts.
So when they arrived I removed all the modern brass nuts and refitted all 48 of the new K nuts. As the access is so tight with all the ancillary items each removal took around half a day.
Note to self: Next time, install and tighten the correct exhaust nuts when the exhaust is being mounted and before ancillary items are installed. 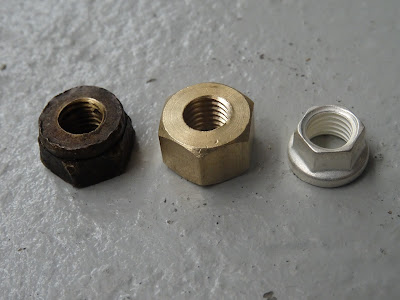 Yes, the exhaust pipe nuts (four on each of the 12 pipes) are hidden in there. 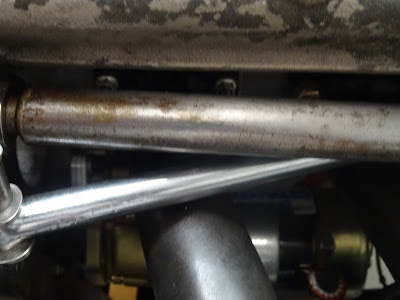 Under engine / gearbox photos
It is not often that you see photos of the underside of these cars so a few are provided below showing the labyrinth of piping. If you compare these to the similar photos in early blogs (prior to disassembly) they are virtually identical but much cleaner now.
As will be noticed I have avoided respraying or touching up the original paint (other than a good polish and wax). 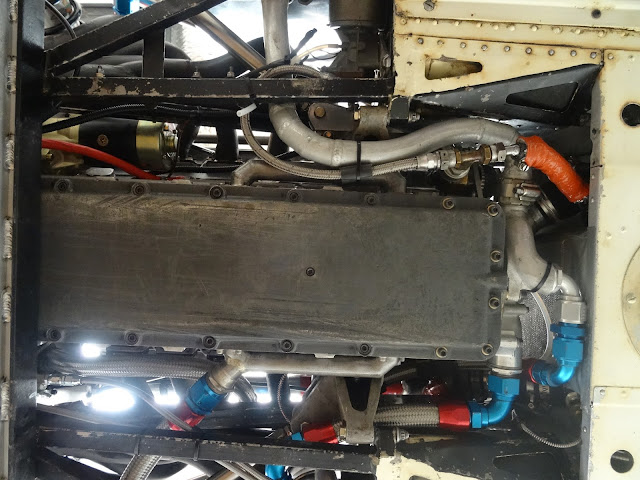 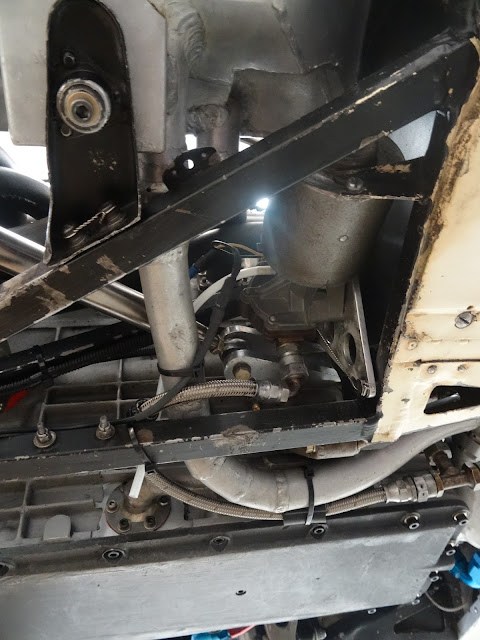 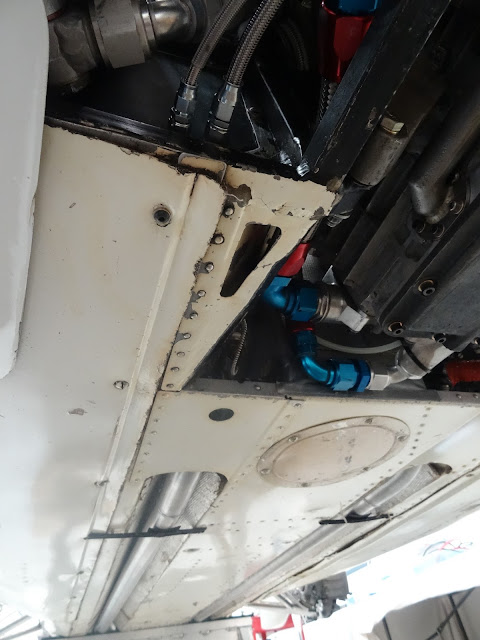 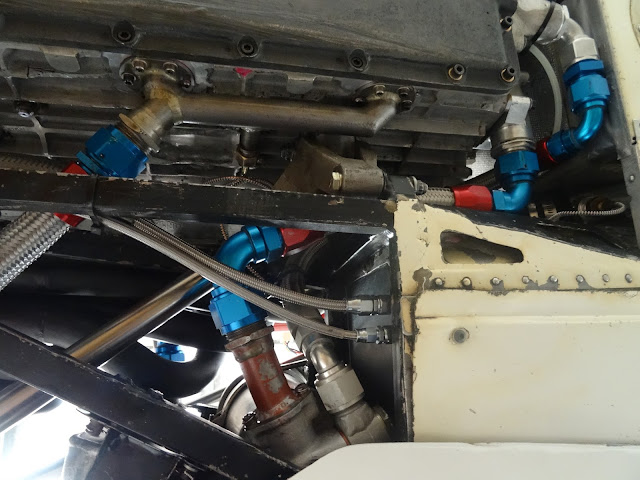 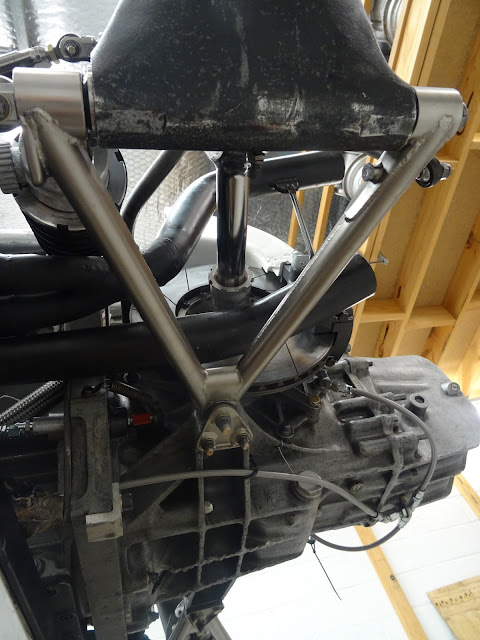 Finally the car is back on it's feet and off the trolley's. 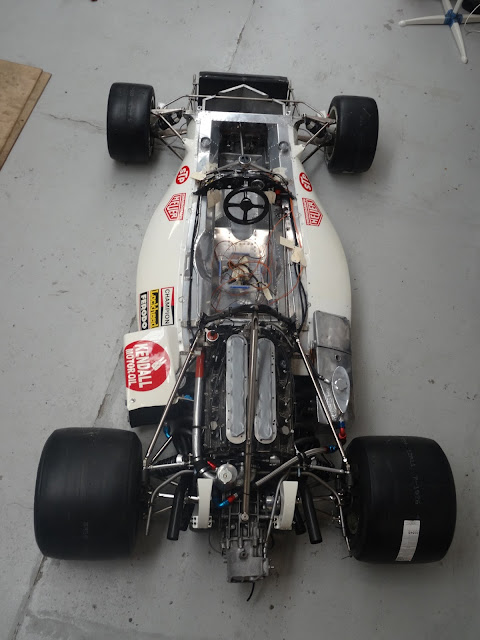 Suspension Set Up
The next few days will be spent on ride height, corner weights, castor, camber and toe settings. 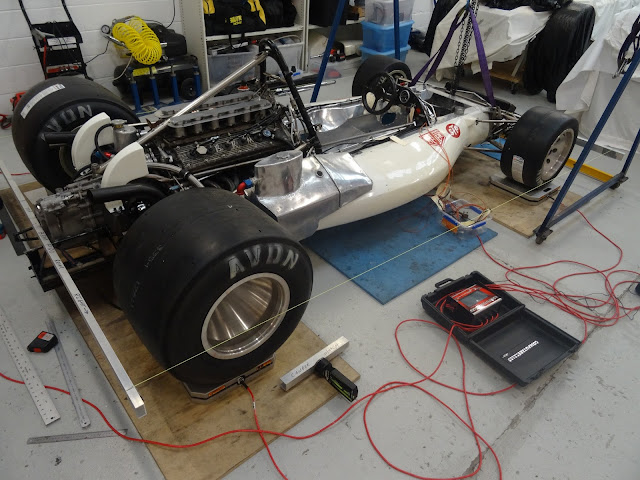 My first task was to set ride height and then corner weights. The weights below were from setting all spring perch to identical heights at front and back. 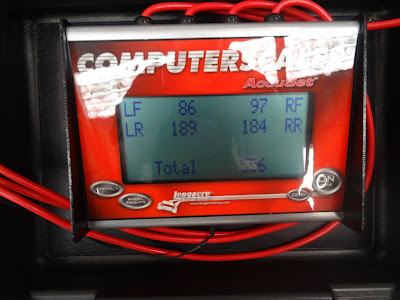 A few very minor adjustments dropping screwing up the left front and right rear spring perch gave me a great outcome (below) with both front wheel weights being equal and only a one kg difference between the rear wheels. 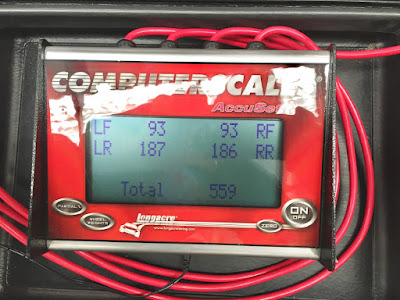 The total weight of 559 kg is with 40 litres of fuel, water and also engine / gearbox oil but no driver, front nose or rear wing. I suspect that the front nose is around 10 kg (heavy old fiberglass) and the rear wing (aluminum) perhaps 5 kg so the total car weight may be 575 kg or so.
The measurements show 33% of total weight on front wheels and 67% on the rear howeve when I sat in it and leaded the front with the nose this increased the front to 38%.


Next blog will be of the car complete with all bodywork and looking pretty.
Then off to the Dyno on the 24th / 25th.