At last, assembly progress to report. About bloody time you might say.

Tricky things these fuel bags I have discovered. Without access to any original fuel bag drawings I have been working with Australian Fuel Cells (AFC) in Queensland to develop a set of detailed drawings that reflects the variable sizes of the side pods, the half bulkhead located halfway down the side pods and also the complex shape of the centre bag space.
Australian Fuel Cells are in partnership with ATL (Aero Tec Labs) in USA who manufacture the bags, in the USA. 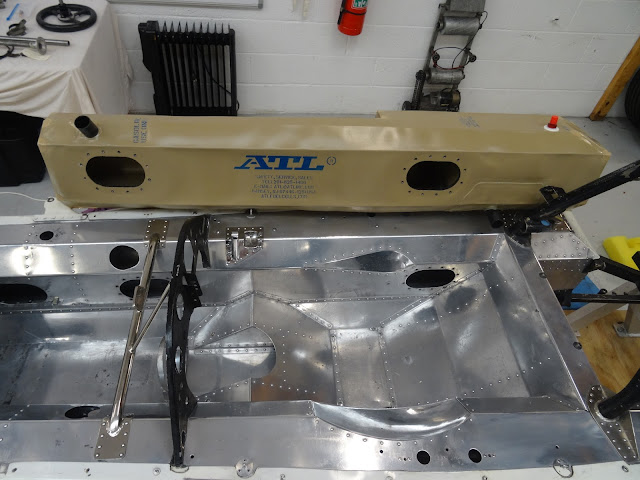 The single bag side pod bag design that we have come up with holds around 20% less fuel than the original two bag side pod bags however is simpler to install and remove. Being a single piece construction it also has less bag to bag joins and connections that might leak. 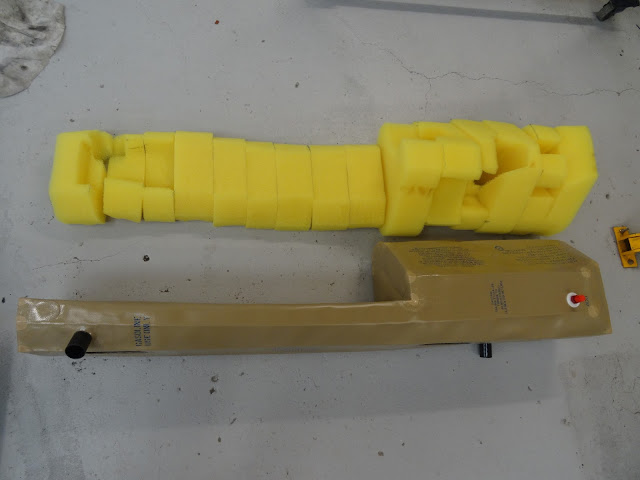 The design has a thinner section at the front half that slides past the fixed half bulkhead in the middle of the side pod cavity.
The yellow foam in the photo above fits inside the fuel bag and slows down / prevents sudden sloshing of fuel from front to rear when braking and accelerating and this also prevents the fuel from excessively aerating.. 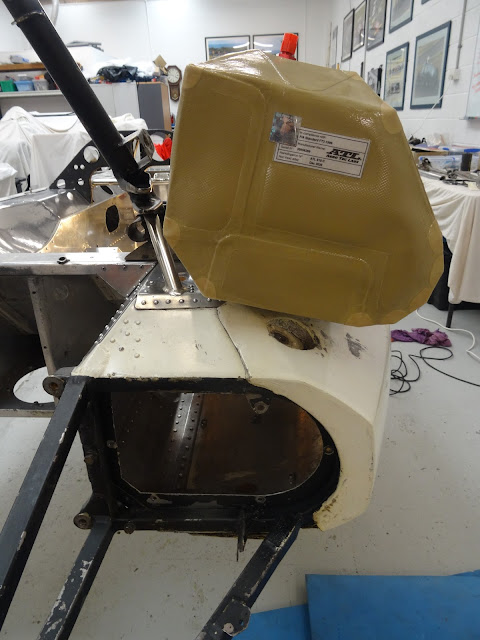 The rear opening to the side pod cavity is where the bag is inserted and removed and as can be seen the cavity hole is somewhat less than the size of the bag. 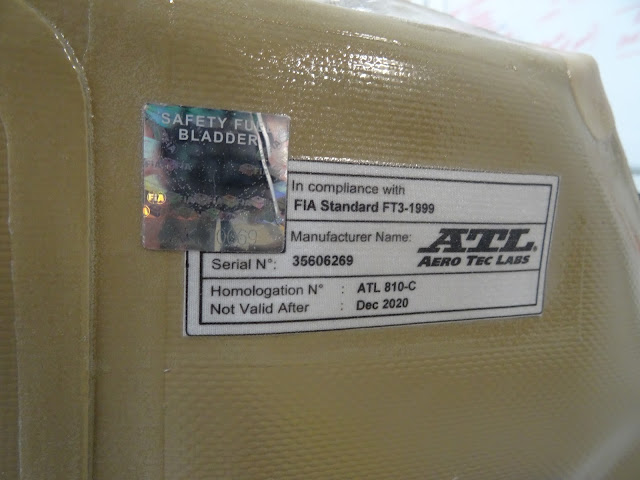 The all important FIA sticker on each bag.
These ATL bags (810-C material) are made from 'ballistic Nylon' that is coated with a 'synthetic elastomer'. They are not as flexible as the 826-A material that ATL carry and I may consider this alternative material for the next build in 5 years time.


Before fitting the bags however all the exposed rivets and other protrusions into the fuel cell cavity must be covered over in duct tape. As seen in the photo below, despite some intense scrubbing some of the residual glue from the original tape remains. 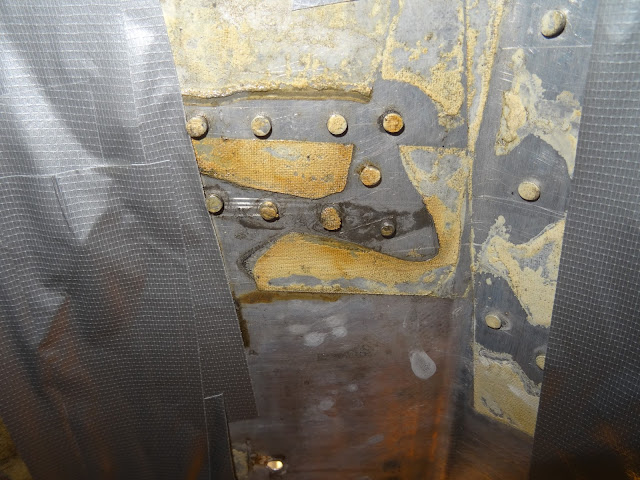 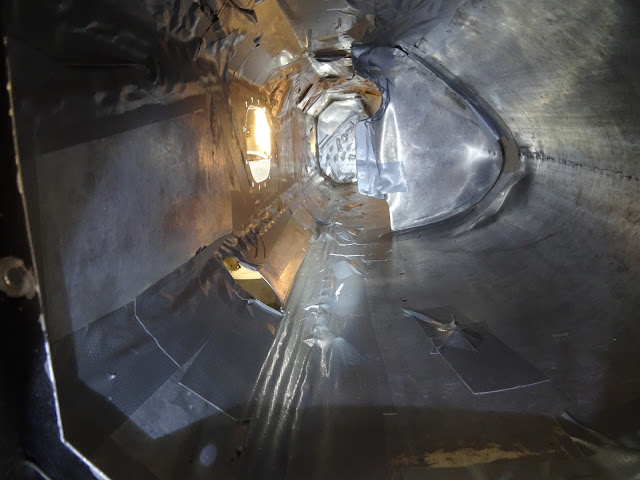 The above photo illustrates the completed 'taping' and the half bulkhead in the middle of the side pod can also be seen.

In order to insert the bags in the side pods they were 'compressed' by tightly wrapping them with duct tape but leaving 'tear off' tabs at the end of each tape wrap in order to progressively release the bag by tearing each wrap off (by reaching your arm deep into the cavity).
I tore off a thumb nail in the process as well but that is another story. Perhaps the wrapping idea may need some enhancement. Some people swear by liberal coatings of baby powder to help reduce 'stick' of the bag against the aluminum as it is inserted and perhaps I will try that next time. 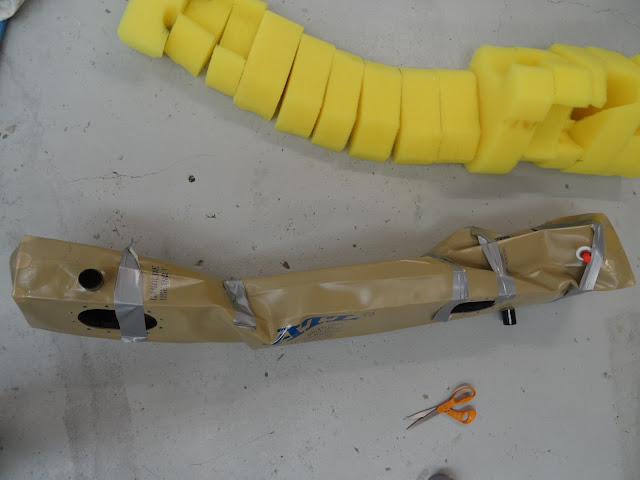 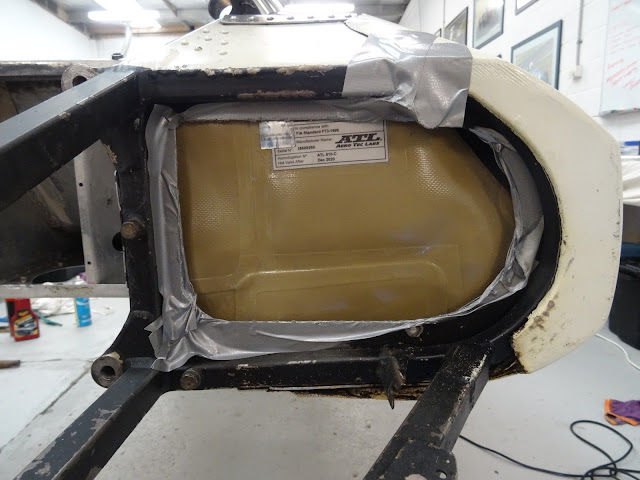 The above is the right hand fuel bag installed and expanded into the full cavity hole. 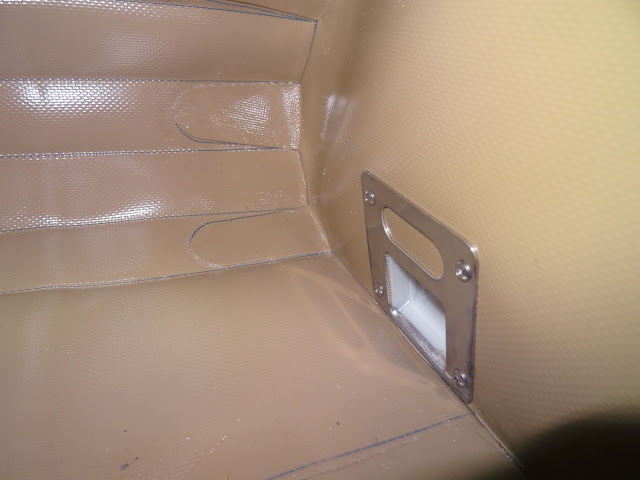 Australian Fuel Cells have designed into the bag a flap valve within the larger section in order to capture fuel in the back end of the bag, In the original two bag setup there was a similar flapper valve in between the front and rear side bags. The objective being to ensure there is always fuel being available at the rear of the bags to flow into the centre collector bag, which is connected to the fuel pump. which is connected to the .... 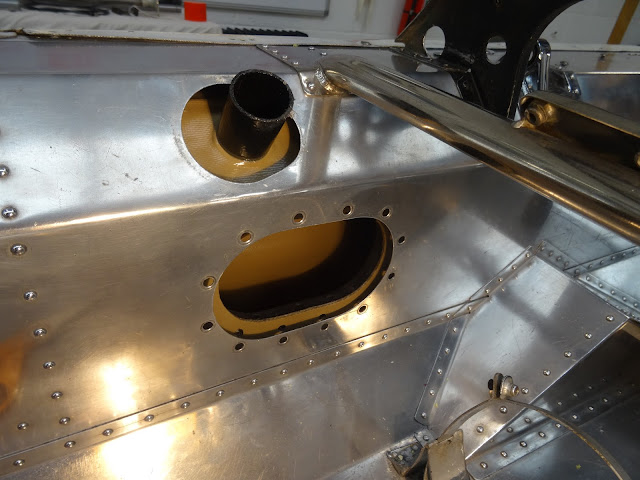 The above photo is one of the two access panels on each side pod, originally each provided access to one of the two separate side pod bags.
What they are for of course (other than to inspect the bag and in the case of the original bags to gain access to the connection pipes) is to allow one to insert all the foam. As can be seen below, large pieces of foam (special foam that does not dissolve in fuel of course) must fit within small holes, and the various cutouts are important to arrange in the correct position. I did get a few bruised and scraped knuckles from this exercise. 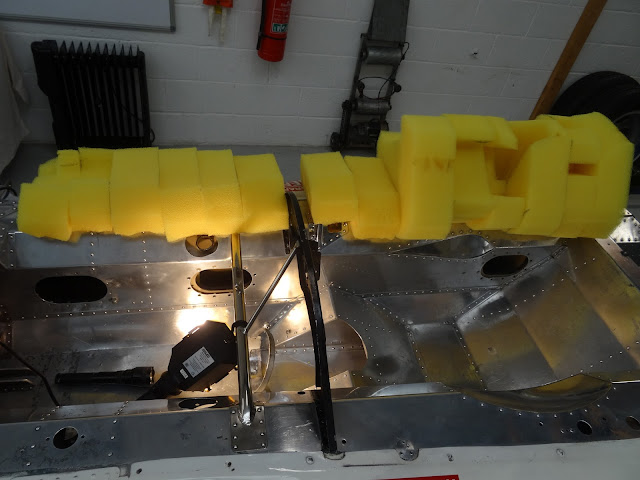 After installing the bags and after consultation with Australian Fuel Cells, we are going to make a few minor modifications to them to improve their fit and connections. So they are going to come out and be sent back to USA.
Australian Fuel Cells have been very helpful with the design process and although it will result in a slight delay to assembly of the rear end of the car, it will mean that in 5 years time when I need a new set of bags I will have a set of drawings that will make it much simpler to order new bags from AFC / ATL that I know will be an exact fit.

I have installed the pedals into the more forward position (for a taller driver) using the originally installed mount plates and the heel rest was riveted in using the holes that were pre drilled in the tub  for this position.
As a precaution I am also installing all new brake lines and as detailed in a prior Post the master cylinders have had a complete rebuild. 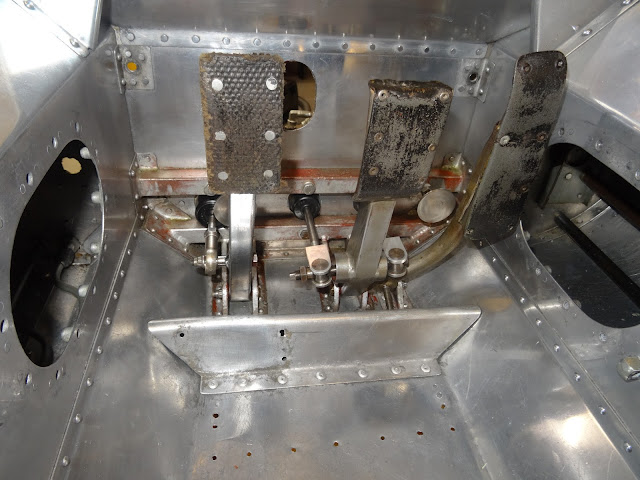 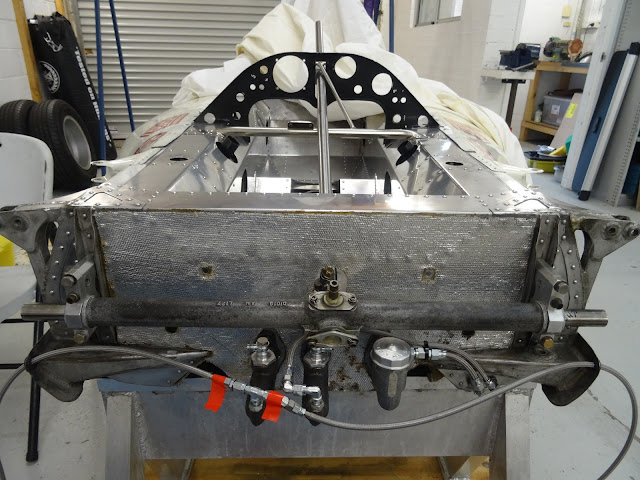 The extension pieces (photo below) for locating the pedals in the alternative (shorter driver) position are being retained for posterity and in case a prior driver of the car, such as Niki Lauda (shorter of stature than I but significantly higher in skill), wanted to take it for a spin. In which case I could fairly promptly re-position the pedals. I mean, you never know .....

The photo below also shows the two new and shorter pedal stops that Crawford Hall has made for me  to suit the more frontwards pedal position. 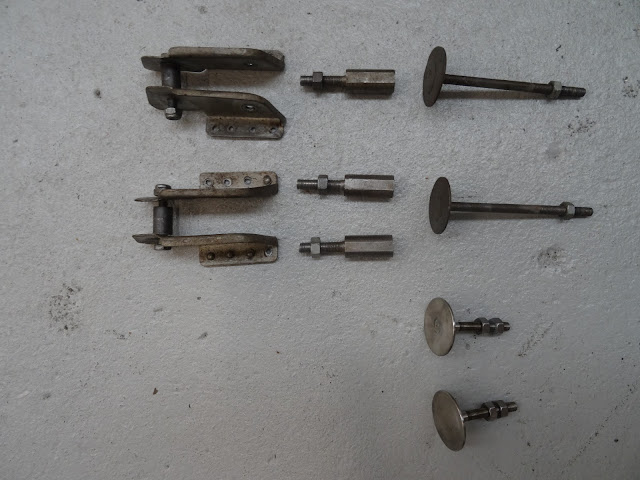 In addition to installing new brake lines throughout I have also decided to replace the hose that feeds the brake fluid from the remote brake fluid reservoirs, one on each side of the side pod cavities.
As shown in the photo below the fluid was fed via a small plastic hose to the master cylinders however I have decided to use dash 4 braided brake hose, which also means a new type of connection. Given the evidence of leakage from the original plastic hose I think this is most wise. The originals will be retained for posterity however.

The remote reservoirs are cute little things and fit into the side pod as illustrated in the photos below. 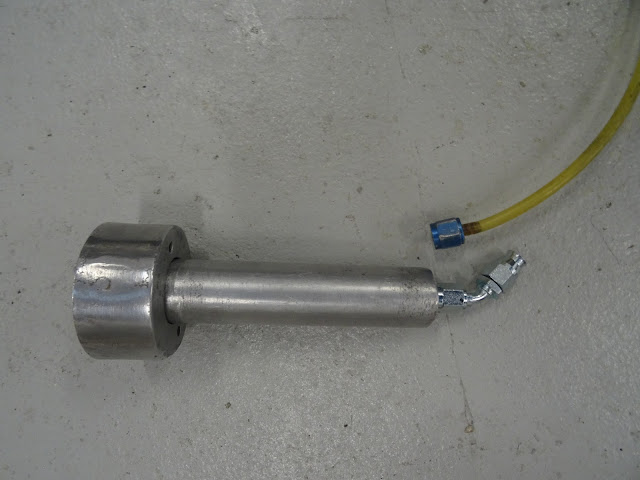 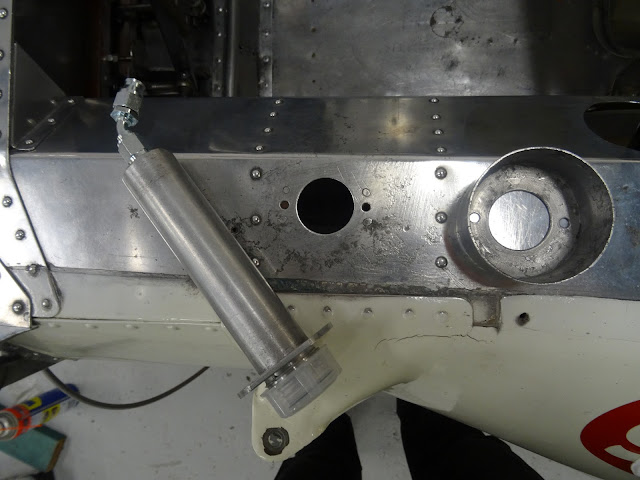 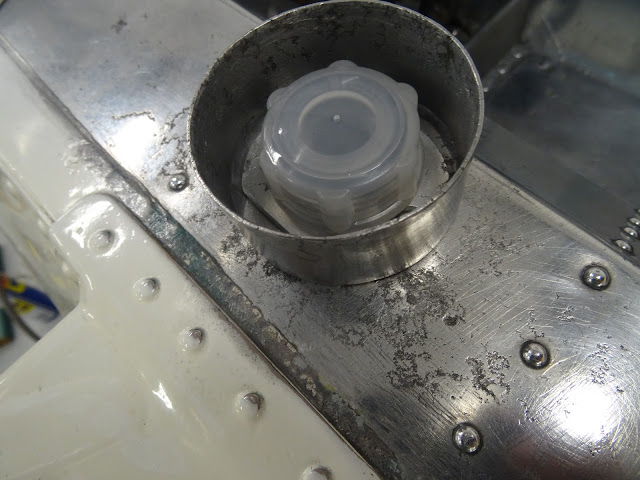 The photo above also illustrates the corrosion of the aluminum tub by spilled or splashed or leaked brake fluid in the area directly surrounding the brake reservoirs. 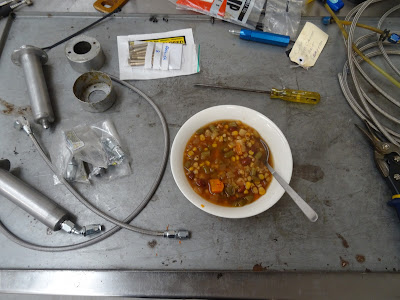