About time for a progress report on the restoration. Progress on some Critical Path items being;

Engine - With Superior Automotive Services. Rodney is currently measuring and recording all timing etc before dis-assembly starts in earnest early next week. Then crack testing of components and ordering the replacement parts.
Gearbox - I and Garry Simkin rebuilding this item. Awaiting advice from Hall and Hall regarding availability of gear ratios, selector forks and gearbox oil pump. Garry has ordered all new bearings and oil seals, should arrive next week. Will take input plus pinion & layshaft components plus drive train components to Steve Hooker for crack testing next week.
Suspension - All wishbones with Elwyn Bickley to make spare but identical replacement items. No progress (by myself) to date on dismantling / checking / refurbishment of front & rear uprights.
Drive Shafts - No progress on dismantling and crack testing
Wing - With Mike Trueman who is making spare but identical replacement item.
Wheels - With Dave Mawer for repair and polishing and check of alignment and also Steve Hooker for crack testing. Waiting on Hall and Hall for supply of four new spare wheels.
Brakes - Originals master & slave cylinders sent to Derry Greeneklee (Power Brakes) to be sleeved. New caliper seals plus some replacement pistons ordered from Bryan Miller (Eastern Raceparts).
Limited Slip Diff - likely these items will be sent early next week to the UK (Brian Miller contact) for manufacture of new inner and spare pawls.
Instruments - Now with Bill Richie to replace copper lines and bulbs (one temp gauge not working the other line very hard and brittle) and check pressure measure for fuel and oil gauges.
Spark Box - Awaiting supply of new (identical looking) spark box by Hall & Hall.
Fuel Bags - They are all out now (see photos below). Need to measure up the cavities and access / breather hole locations in the monocoque and decide who to send them to for manufacture of replacements.
Crack Testing - No progress other than wheels
New Wiring Harness - No progress
Body - No progress on replacement of front nose or missing bodywork panel behind drivers head or cleaning / polishing of monocoque. Hall and Hall have advised they may be able to provide a new replacement nose and a radiator cowl which would save making a new mold here in Aus.
Steering components - No progress on dismantling / checking / crack testing.
Radiator / cooling - No progress on dismantling / checking / repairs to and flushing of radiator and water pipes.

I have taken 1550 photos so far of the progressive dismantling. Printed out the first 500, need to print the remainder and get organised with records next week and make a book or two for ready reference (working backwards) for when reassembly commences. 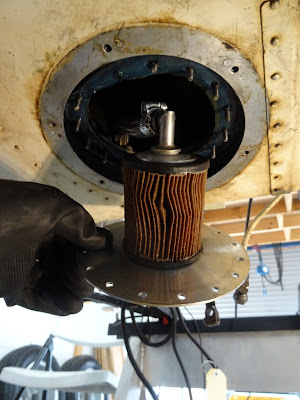 I discovered that the removable plate in the central collector fuel bag (accessible from under the car) is for a large fuel filter. Funny how the plate decides to come loose and discharge the residual fuel in this tank just when you are lying directly under it checking it out, after removing all the nuts. 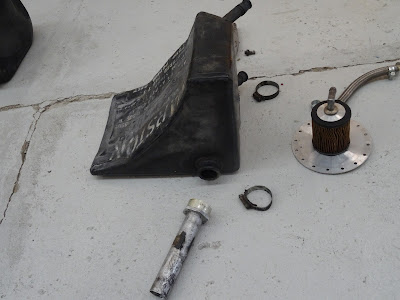 Central collector fuel bag that sits behind / under the drivers seat and just in front of the engine. 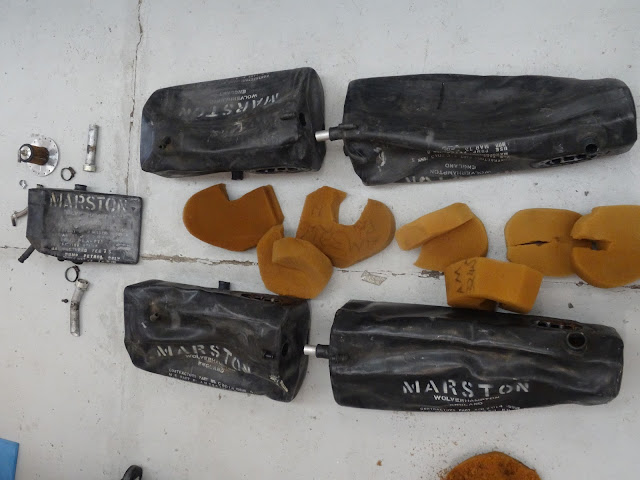 Full compliment of fuel bags for a 1973 BRM P160E.
The driver nestles down all very comfy in the middle of all this fuel of course. 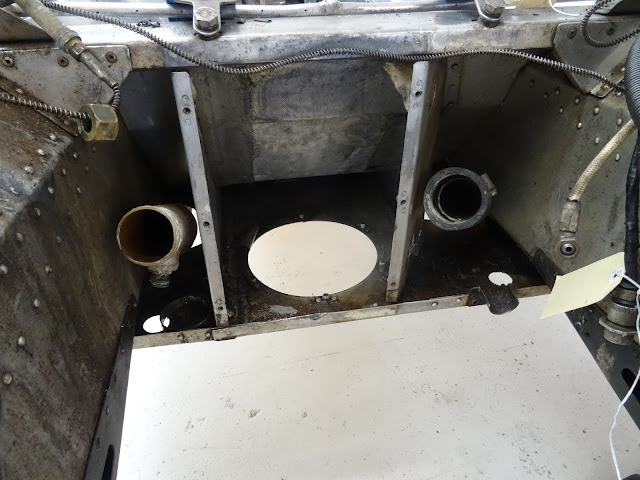 Front of engine bay (ie looking forward) with central collector fuel bags and various pipes now removed. The sloping back of the drivers seat is in the centre of the photo. 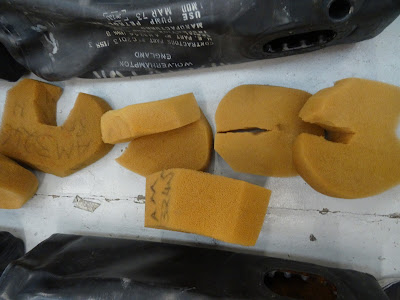 All the original 1973 foam that was from inside the fuel bags (to reduce the extent that the fuel sloshes around under acceleration / cornering or braking) was in great condition except for one piece, below. This piece just fell apart as soon as it was touched. It was more coarse than the other pieces and perhaps was of a different material or from a different manufacturer perhaps. 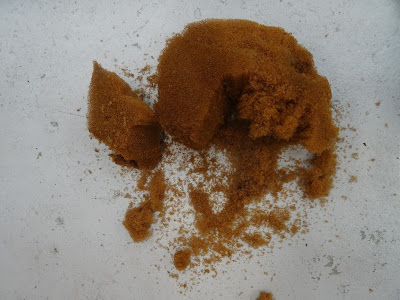 There was a small moment of excitement in removing the fuel bags from the Right Hand side of the car. It has to do with the compressed cylinder fire extinguisher. 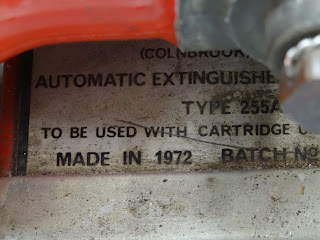 So I had not got around to removing or even dismantling (ie removing connections) from the fire extinguisher system - it was made in 1972 (photo above) and what battery to trigger the system lasts that long. 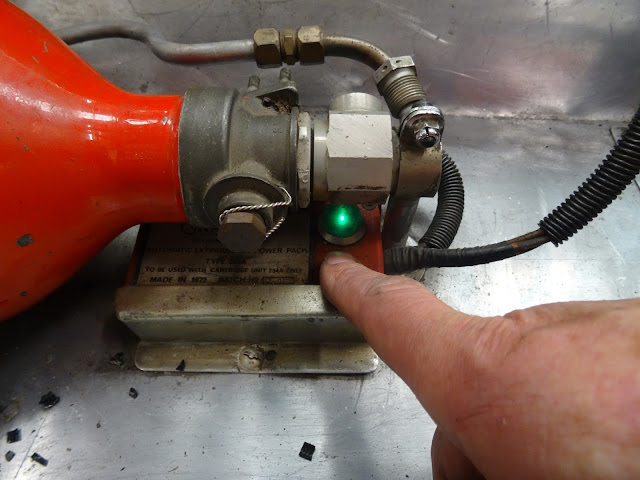 So I nearly wet myself when, whilst working on removing the allen screws from one of the access plates to the fuel bags that my socket came in contact with the button on the unit and there was a sudden buzzing sound and the green light went on. Fortunately it did not discharge. Bad language was spoken however. 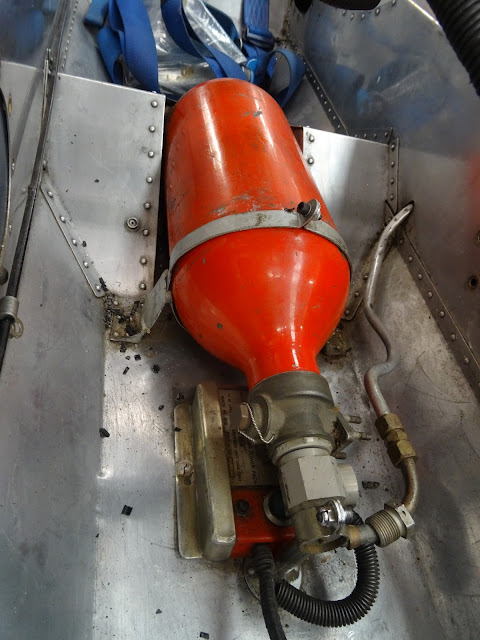 This is the compressed gas cylinder that tucks in there between the drivers legs, one's groin against the base of the unit (photo is looking back, from the front of the cockpit). Comforting? 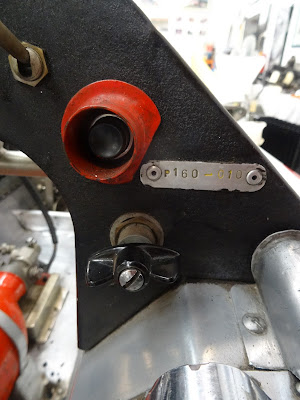 Discharge is triggered by either pressing the button on the dash (photo above) or by automatic activation by either of the two heat / fire sensor / trigger units (photo below), one mounted on the roll bar directly behind the driver, in front of the engine (above the fuel metering unit) and the other trigger unit mounted behind the dash in the cockpit. 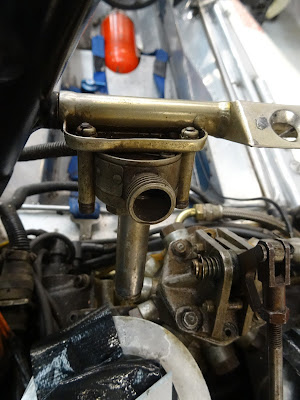 Once triggered, the liquid / gas mix released by the pressure cylinder flows into a U shaped aluminum tube that wraps around the driver in the cockpit and is in theory sprayed onto the driver via small holes drilled in this tube pointing into the cockpit zone (see photo below). 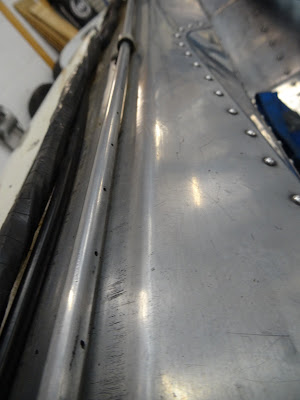 The electrical connections are now unplugged!